On February 9, 2016 Medicine Hat College’s (MHC) Brooks Campus held their annual awards ceremony. An event that according to Reg Radke, manager of regional stewardship is an opportunity for the college and community to applaud the accomplishments of their students.


“This is an emotional day for many of our students,” says Radke. “They are not only achieving their academic goals, but a lot of them are doing so while they are working full or part-time jobs, and supporting their families.”

Amongst the winners were practical nursing students Katharina Banman, who received the Outstanding Student of the Year award, and Sheryl Dowler the Spirit of Learning recipient.

“Both of these students have inspiring stories and come from very different backgrounds,” says Radke. “Katharina is part of the Low German Mennonite community and is a great example of a solid, consistent student, with very good grades who has embraced post-secondary life. We have no doubts that she will be quite a role model in her community.”

Dowler, according to Radke is a student that has not only proven strong in her academic career but her personal life as well.

“In her first year, Sheryl took a temporary leave to look after her mother who was diagnosed with breast cancer,” says Radke. “Recently, she was also diagnosed with it and has been undergoing chemo treatments while attending class. She is a strong student, who has shown resiliency, and is always willing to open her home to her peers when they are in need. Her positive outlook is inspiring and she is very deserving of this award.”

This year’s ceremony took a surprising turn according to Radke who was named Employee of the Year.

“It came as a complete shock to me. I was helping to design the program and thought the award was going to a colleague; little did I know they were all scheming in the background,” says Radke. “When my name was called it truly was a surprise, one that I am honoured to have received.”

If you are interested in learning more about the programs available in Brooks visit www.mhc.ab.ca/BrooksCampus. 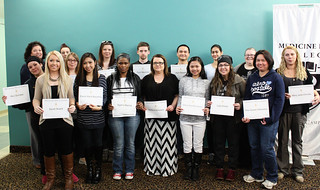