A look at prescription drug use by Medicine Hat College (MHC) students was cause for concern three years ago, but has since become an opportunity to address mental health issues on campus.

In 2013, members of the Students’ Association at MHC (SAMHC) reviewed the types of prescription drugs being processed through the student health and dental plan and discovered an alarming statistic. Nine out of the top 10 prescribed drugs for MHC students were anti-depressants.

“That was a level not matched by any other institution in our campus health network and was cause for serious concern,” said Landon Heilman, SAMHC president. He noted that birth control is typically the most common prescription drug used by college students.

To add to these concerns, mental health supports on campus were lagging and students were waiting weeks for appointments or not being seen at all. There were no drop in times available for crisis intervention. 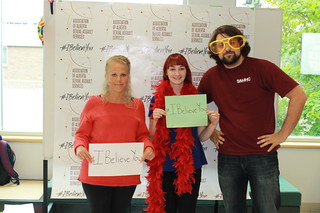 “Educational seminars and awareness weeks are common across most institutions, but it’s creating opportunities for interaction that is key to success. We didn’t just use the money, we found innovative ways to increase student engagement.”

For example, SAMHC introduced “puppy therapy,” by bringing in specially trained dogs to interact with students.

“This activity really helps students around exam time. The dogs can actually sense who is stressed and go to them,” said Heilman.

Punching bags and hula hooping were two other popular activities that SAMHC used this year to help students relieve stress and have fun. Support for LGBTQ students on campus has also been strong, thanks to the efforts of Under the Rainbow, a new college club, and the local LGBTQ community group.

According to Trish Charette, general manager of SAMHC, Under the Rainbow has seen staggering growth in attendance at its events and has quickly become the gem of SAMHC.

“We hope that as more demographics in the college see the successes of this club, they will come forward to ask us for support,” added Charette.

By getting to know students and learning what they’re passionate about, SAMHC is able to engage individuals and groups and use their talents to tailor activities and events that fit their needs.

Heilman noted that having solid relationships with community partners and MHC employees is also critical to their success. Members of the SAMHC team have made a point of getting into the community, joining different organizations, and learning what services are available.

Three years later, he and the SAMHC team have solid proof that their efforts, and those of the executive teams and staff before them, are making a difference.

Now, only four out of 10 prescriptions processed on the student health plan are for anti-depressants.

“The coolest thing about this initiative is we can see that it is working. We have had strong executive teams and ongoing support from permanent staff members to keep these initiatives moving forward,” said Heilman, who hopes that funding for mental health will continue.

The team recently received an award from ASEC for their outstanding work on mental health initiatives and will be showcased to Alberta Health Services and the provincial government in a video case study later this spring. They also had the opportunity to share their success with other institutions at the ACMHI Wellness Summit in January.

“We’re definitely seeing results and are so excited to be seen as leaders of innovative strategies and programs,” said Heilman, who will pass the reigns of SAMHC and future mental health initiatives to incoming president Beth Lewis on May 1, 2016.